I’m still all starry-eyed and off in lala land thinking about how COOL it was seeing Madonna perform, live in Denver during her MDNA tour.

Madonna. Live. 100 feet from our seats. And I don’t care what you non-fans say, that woman is a legend, with a legit set of pipes. And can dance like no other. And has the body of a 25 yr old triathlete.

Before the show! Tickets in hand and ready to rock out!

We got to the Pepsi center ridiculously early and found our seats. 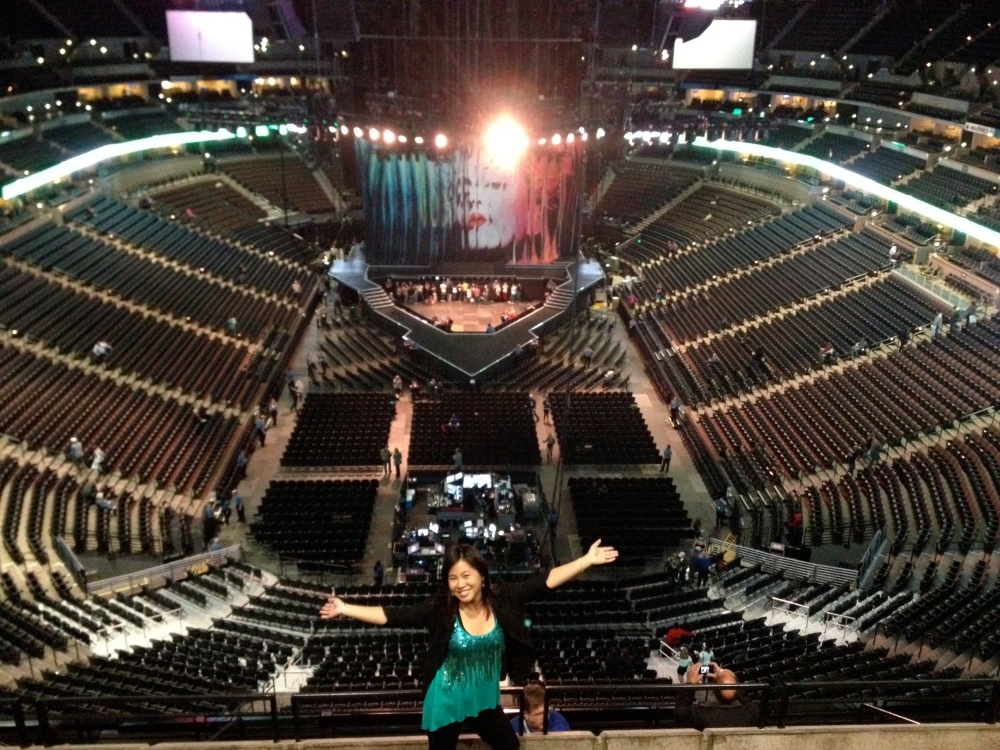 During the opening act, the super close/bottom sections were scarcely filled. Being the thoughtful fans we are ;) we didn’t want the opener to feel neglected, so we decided to leave our seats for ones much closer.

Without any question, we were able to score seats 14 rows from the stage! We stayed, hoping that the owners of said seats wouldn’t show up, but were happy to move back if they did. (someone should enjoy them, right?!)

No zoom on my iphone, guys. This is how close we were!

During the opening act, one of my goals in life happened: We got on the jumbotron! Phuc Tien and I were dancing and singing in our sweet seats, having a blast, and the cameraguy noticed, so we had at least 30 seconds of fame. No big deal. We’re famous now.

Not long after, the lights got dark, and everyone started screaming! Madonna was about to take the stage! It was worth the wait (note: no one ever did show up to take back the seats, so we got to enjoy the entire show this close!)

Madonna’s set was really cool. The main stage had at least 40 cube/platform things that would rise/drop depending on the song, with TV-like screens on all sides, changing colors and pictures.

Everything was over the top, such a theatrical show. Madonna was all over the place on that stage. And she probably had 50 backup performers/dancers with her, and everyone was constantly changing costumes and dancing and singing or hanging from the ceiling while playing drums.

There was never a break of lull in the show. It was nonstop entertainment. At one point, she sang a very racy (but tasteful!) version of Like a Virgin, acoustic, in her bra and leather tights. Love her or not, that woman has a rockin’ bod.

She played a bunch of classics, including my all time fave, Like a Prayer, complete with a full choir.

I had an absolute blast, and the performance was so much fun. Madonna played nonstop for 2 full hours, with only one break to chat with the audience about how important it is to get out and vote. I appreciate when famous people use their influence to encourage people to take responsibility.

The night was amazing! Thank you Phuc Tien, a million times more, for the incredible birthday present and taking me to the show! Love you girl!